Get your super-suits and ready your death rays. There are a bunch of kids with superpowers and no adult supervision anywhere in sight. 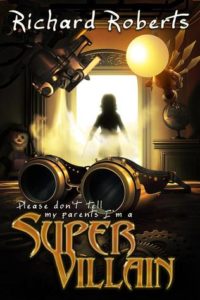 So I’ve noticed that superheroes are really hard to write books about. This is mostly because its really hard to describe what a superhero costume looks like without visual aid. I mean, seriously, how do you describe a costume like Superman’s or Spiderman’s in a way that naturally flows with a narrative?

Well, let’s see how this author does.

Please Don’t Tell My Parents I’m A Supervillain by Richard Roberts (Geez that’s a long title) follows Penelope Akk, the daughter of two retired superheroes, and her friends as they develop superpowers, get mistaken for supervillains, and becomes embroiled in the complicated world of superhuman conflicts. Plus they’ve still got to finish their homework before school.

So, in this alternate Earth, superheroes and supervillains are a common feature in everyday life and for some reason mostly base themselves around Los Angeles.

Powers can either develop naturally from having parents with powers, from magical artifacts, interactions with wacky radiation, or just from honing natural talents to the point of perfection.

As for the superhumans themselves, they almost never interact with the government and seem to have their owns forms of governance that even form treaties with each others and establish territory inside already established countries. For example, LA’s Chinatown is a safe zone for supervillains where they can hang out without superheroes bothering them.

Honestly, the way this world works is fascinating and I wish we could learn more about it in the book. However, considering the main character is 13, she wouldn’t really care and thus much of the politics goes unexplained. So I give the author a pass on this, especially since he integrates exposition about the world into the narrative very naturally and organically.

One of the reasons I’m interested in checking out the rest of this series is because I want to find out more about how this world works.

I’m going to say this up front. The plot is, in my opinion, the weakest part of the book.

It uses a trope that really grinds my gears: kids lying to their parents and not telling them something really important.

Yeah, that’s right. These kids get mistaken for supervillains, and instead of just telling their parents what happened, just keep trying to fix things themselves. That is so stupid, especially since Penelope’s parents seem like very reasonable people. But, nope! Let’s just keep putting ourselves in dangerous situations and try to be those cool superhumans who aren’t completely good or evil, nothing bad could possibly come of this.

Spoilers: bad things come from that.

At several points in the book I was thoroughly engrossed, but then I’d remember that these kids are 13. This honestly could have been fixed by aging them up a bit into 16 year olds, but I would have adored this book when I was 13, so I can let it slide.

On a more positive note, the supervillain underworld is handled well, even if it illustrate once again how dumb these kids are for not telling their parents. Most of the villains are what one supervillain calls “gentlemen rogues.” This means that their main goals in life are to steal money, steal artifacts, acquire power, acquire territory, and beat up superheroes. However, that same character says that “for every gentlemen rogue in this business there are five true psychopaths,” and we see that in a brilliantly done scene that I shall describe.

See, one of the three main characters has the power of cuteness, meaning she can basically make every around them think she’s as adorable as a box of puppies, which is not as useless as it sounds. Anyway, our protagonists get into a confrontation with some other supervillains and our cute character, Claire, tries to talk them out of it. It works a little too well. One of the villains grabs her by the throat and says he’s going to enjoy adding her skeleton to his collection. Yeah. This book doesn’t shy away from the fact that supervillains are dangerous and do actively kill people.

And on that cheery note let’s look at…

Here is where this book really shines. These characters are interesting, relatable, and fun to read about, even if they make a few bonehead, dumb decisions, but we’ve all done that before in our lives.

Penelope Akk (aka: Bad Penny): Our view point character and mad scientist extraordinaire. Penelope is something of an oddity, and it’s not because of her powers (though we’ll get to that). She is the daughter of two semi-retired superheroes, with a best friend whose mom is a superhero, she lives in a world where superheroes are a regular occurrence in daily life, and is desperate to find her own superpower.

Yet despite this, she is not a “superhero nerd” like her friends. She doesn’t collect superhero memorabilia or memorize the names of every superhuman and all their battles.

At first this seems really at odds with her desire for a superpower, but makes sense once you think about it. She’s been raised with superhuman parents in a world where superheroes are a normal thing. To her they’re just part of everyday life. I find this to be one of the most intriguing parts of her characters.

The other intriguing thing about her is her power. She has the ultimate mad scientist power. When she’s inspired by a concept or idea, she enters a trance-like state where some deep part of her brain takes control of her body and builds a super-science device based on whatever inspired her. The exploration of this power, what it can build, and how it develops are all fantastic and makes me wish for a power just like it. You don’t even have to know all of the science behind a machine, just enough to get the ball rolling and BAM you’ve got a teleporter.

Beyond this, Penelope is an adorkable nerd with braided pigtails and big glasses. She’d be a fantastic lead character in any story because of her curiosity, determination, good heart, and stubbornness. She makes mistakes, but almost all the mistakes fit with her character. Even not telling her parents about her superpowered escapades makes a modicum of sense given her character and the turn of events.

Claire Lutra (aka E-Claire): Claire is awesome. She’s the daughter of a supervillain-turned-hero single mother. Looks like she should be one of the “popular kids” (you know who I’m talking about) but instead is a total nerd who proudly hangs out with her “un-cool” friends. And has a seemingly useless power that she takes full advantage of. Yes, that’s right, she’s the one with the cuteness power and it’s hilariously amazing.

She’s also kind of the chaotic neutral member of the trio. Most of the way through the book, she just wants to have fun with her powers and it doesn’t matter to  her whether the world sees them as heroes or villains. You really see that change after the scene with the skeleton guy. It’s subtle, but she stops being so brazen about the supervillain stuff. Her arc is less clear than her friends, but still there and she is still awesome. Even if her super-suit is a teddy bear onesie.

Ray Viles (aka Reviled): Yes, all of their supervillain names are puns and I love it. Ray is a character that’s hard to talk about without giving spoilers. He’s the darkest of the trio, but with good reasons that are only hinted at throughout the book. He has a good heart, but is very emotionally driven. Ray is the character where you can see the dark side pulling at him and you root for him to stay good. Despite this probably making him sound like an emo, he only gets mopey a few times. Ray is hard to explain, but a very relatable character.

Also, for some reason he has a British accent. It’s never explained, he just kind of has it. The jury is still out on how I feel about that.

I would go in to some of the side characters, but there are a lot and this review has taken long enough to get out as it is so I think I’ll just skip to…

Overall, this book is a great middle school level book, and I don’t mean that as an insult. If you can suspend some of your disbelief at the age of the characters, you will have a great time reading this.

While it has it’s problems, I think anyone would agree that they would have absolutely adored this book as a kid. As an “adult” I look forward to reading the next installment.

On a scale of 1 to 10 I give Please Don’t Tell My Parents I’m a Supervillain by Richard Roberts an 8.

Buy it and give it to your kids once your done.

Sorry this took so long. I have been super busy with college, much more so than I thought I’d be. I still plan to do these reviews, but there may be long gaps between them. Don’t hesitate to give me suggestions and let me know what you think of my reviews and whether you think you’ll check this book out or not.

Next time…oh boy. We’ll be taking a look at something that’s gonna be a little hard for me to talk about. No witty phrase here, I’ll be reviewing Prelude to a Change of Mind by Robert Stikmanz.